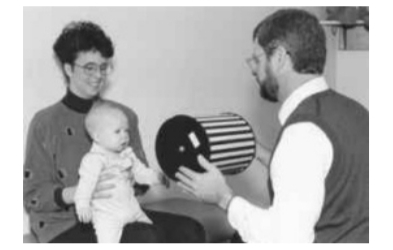 OKN Drum has been proposed as a method of measuring visual acuity in Neonates upto 3 months.

OKN is stand for optokinetic nystagmus is an innate and complex ocular motor reflex that allows us to adequately follow moving objects when we keep our head steady. The OKN response to stripes, which move across the individuals field of vision has been used as an objective way of measuring visual acuity for several decades.

Accurate visual testing of infants is very important. Early detection of visual acuity deficits in preverbal children would be valuable for ensuring the steps are taken to prevent amblyopia, and for diagnosing organic conditions that affect visual acuity. Three main techniques are currently used for objective assessment of visual function in children who are young for standard subjective testing. 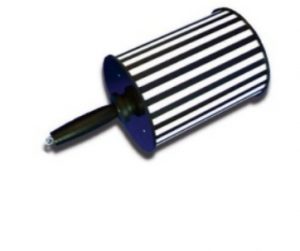 The optokinetic drum consists of a handle and a drum that can be readily rotated on the handle. The drum is cover with alternating vertical white and dark stripes that should be oriented vertically in front of the patient.

Set the drum up on a table. The OKN drum of the size 10×8 inches in diameter and it is held at 1foot (30cm) away and rotated at 8-10 rpm. The stripes should be vertically positioned and moved horizontally at both slow and fast speeds. The examiner observes patient’s eye movement as they follow the rotating drum. Start the motor, select a speed, and keep the drum spinning at this speed throughout the experiment. The exact speed of the drum is not so important, try to spin the drum at a quick, steady place but not so fast as to blue the passing stripes. Instruct the patient to look at the spinning drum

. The child movements are involuntary and uncontrollable because their eyes should jump back to look at a new Pattern, as the one they originally followed rotates out of sight. Eyes respond with a slow movement in the direction of drum lasting about 0.2s and fast phase in the reverse direction of 0.1s. Move the patient farther and farther away from the drum and make note that if the distance at which the OKN is no longer apparent. It is done with both eyes open and should be awake.

OKN can be elicited at birth but has poor directed saccade which can be reasonably accurate by the age of 3months.

Theoretically if an individual can visually discriminate the series of bars movement across the visual field, as the target gratings rotate, OKN is observed. Clinically, a catford drum or an OKN drum is available to measure visual acuity.

The visual angle is subtended by the smallest stripe width that still elicit’s an eye movement is a measure of visual acuity. It is reported that OKN acuity is at least 6/120 in the newborns and improves fairly rapidly during the first few months of life, reaching to a level of 6/60 at 2 months, 6/30 at 6 months and 6/6 by 20-30 months.

An eye movement response indicates that a grating can be seen, the movement can be directly observed or more accurately, electro- oculography can be used to trace and record eye movement. A number of visual problems can generate abnormal OKNs, however a normal OKN only indicates that a) the macula is getting a good image of the stripes and b) the oculomotor pathway from the retina to the brainstem and back to the eye muscles is functioning properly. The speed of the drum, is difficult to control and may provide variations in results. The OKN response has been elicited in those who have suffered stroke damage to the visual cortex or higher visual cortical areas as well as those with extensive peripheral vision loss due to glaucoma or diabetic retinopathy. Thus, it is possible to get normal OKN responses from people with significant visual impairments.