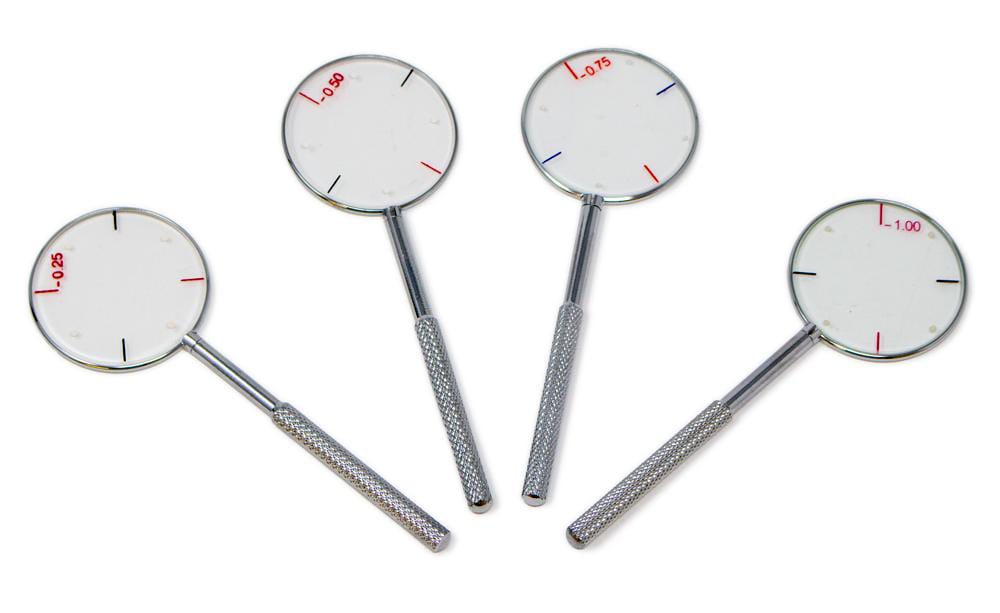 The Jackson’s cross cylinder is a lens of fundamental importance in optometry with a key role in the refraction routine. It is used to verify the strength and axis of the cylinder prescribed. It is a combination of two cylinders of two cylinders of equal strength but of opposite signs placed with their axis at 90° degrees to each other and mounted in a handle. Jackson’s cross cylinder ( JCC) technique is also called the flip cross technique.

• Stokes described the original concept of cross cylinder in 1849.

• Dennet used the stokes lens in a variation of the present technique.

• Crisp brought it to world wide attention and it has become known as the JCC technique.

• The present technique discovered by Dr. Edward Jackson for the determination of cylinder power in 1887 and for axis in 1907.

• A handle is attached between the two marked axes which enables the lens to be “ twirled” before the eye by rotation of the handle.

In this manner, the positions of the minus and plus axes are interchanged rapidly and alternately.

• The common term used for the rotating the handle is known as flipping.

• Hence, the JCC is often termed as flip cross cylinder.

Verification of strength of the cylinder

To check the power of the cylinder, the cross cylinder of (+-)0.25 D is placed with its axis parallel to the cylinder in the trial frame first with the same sign and then with opposite sign. In the first position, the cylindrical correction is enhanced by 0.25 D and in the second it is diminished by the same amount. When the visual acuity does not improve, in either of the positions the power of cylinder in trial frame is correct. However, if the visual acuity improves in any of the positions a corresponding correction should be made and re-

Verified till final correction is attained.

Verification of axis of the cylinder

Cylinder or vice versa and the patient is asked to tell about any changes in the visual acuity. If the patient notices no difference between the two positions, the axis of the correcting cylinder in the trial frame is correct. However, if the visual improvement is attained in one of the positions, a” plus” correcting cylinder should be rotated in the direction of the plus cylinder and vice versa. The test is then repeated several times until the neutral point is reached.

The most accepted procedure used by the overwhelming majority of examiners is the JCC technique. Freeman and Goar considered the JCC to be the most delicate test for astigmatism. The use of JCC is very important in clinical practice of refraction and it serves as an important instrument for optometrist.

I have completed Diploma in Optometry with Ophthalmic Technique from Calcutta National Medical College and Hospital ( SMFWB).